skip to main | skip to sidebar

in response to ALICE KETTLE'S 'The Garden of England' exhibition. 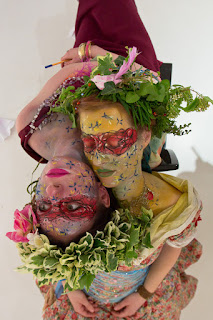 For their performance, titled 'Quedenraha', at the 'Garden of England' exhibition, Akleriah will bring together at the Queen's House an eclectic combination of dancers, musicians and performers. The cast will be dressed in custom-made costumes of extraordinary opulence, reflecting the two Queens of the House and their legacy on the world. Akleriah is an eco-friendly duo and their costumes will incorporate the experimental use of traditional hand crafts and the upcycled waste of contemporary consumer society.

'Quedenraha' will challenge the perception of the space as well as of the human body, questioning and interweaving the mind and the body into a rich psychological fusion. 'Body' is often referred to in botanical terms and especially in relation to women. The clothes and make up of the female and male have influenced myths throughout history, body mobility, the cultural perception of masculinity and femininity and the power and social status of humans.

The performance will play upon the history of the Queen's House and will enact a mysterious mathematical game, inspired by the grandeur of the past, which echo on the geometric floor of the impeccable Great Hall. Likewise, the House's role as a lighthearted 'party home' - which hosted masquerades and plays - and its sombre reality will be explored.

'QUEDENRAHA' WILL TAKE YOU ON A JOURNEY THROUGH MOVEMENT, SOUND AND VISUAL EXTRAVAGANZA.

'Quedenraha' performance will last approximately half an hour and there will be 5 performances, each starting on the full hour from 11am.

at The Royal Museums Greenwich stand 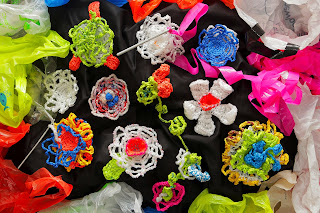 AKLERIAH with a guest artist KSENIA ANDREEVA will be hosting a drop-in workshop demonstrating how to crochet flowers out of plastic bags. The artists will be dressed as Regal Flower Fairies.

Suitable for beginners and advanced professionals alike, from ages 6-150. Akleriah will help anyone master the art of crochet flowers, taking a creative and ethical approach to crochet. For those wishing to take their art home, the participants will be able to stitch brooch backs to their creations and wear them. Others may wish to donate their flowers which will be used as part of costumes for the performance, Quedenraha, on 23rd March at The Queen's House.

Several Akleriah costumes for the Quedenraha performance will also be exhibited. If you can, please bring along your used plastic bags for the workshop! All other materials will be provided.

Akleriah look forwards to seeing you at The QUEEN'S HOUSE on 23rd March and OLYMPIA 14-17th March! 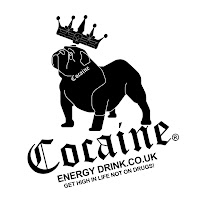